Accessibility Statement
Click the icon for a change of contrast in the page style:

(Gift Aid not included in total.)

Lovely weather today and a late leisurely start - intending to do 15-20 miles, but I took a wrong turn in the Purbecks and ended up doing 43!!! Still, all good training. I will load some images and the route map later when I sort out the phone.

Short choopy ferry journey, glad I was not sailing today, and disembarked in rural Dorset having cycled entirely in town to that point. From there it was lovely Dorset country roads to Corfe Castle which only became visible at the very last minute. Fantastic views looking down from the Purbecks to Poole and Poole harbour on the way.

At Corfe Castle I then checked the map and decided to do a cicular tour of a few miles which would bring me back to the Castle - but alas not to be seen again on the journey today.

Sadly the next 5 miles or so were on a main A road to Stoborough where I could then turn left into more of rural backwater Dorset. I had an OS map with me and a Dorset CC cycle route map but none of the cycle routes seemed signposted or appeared on the OS map - the edge of which I was rapidly reaching. So, at the next major junction I headed left through the (open) Army tank ranges towards Lulworth East passing Lulworth Castle en route.

That's where I was supposed to return to Corfe Castle on the circular route but missed the turn and went the wrong way for a few miles so I decided to go further than I had intended (well the weather was good) and head to Wool. There I would find a route home off major roads and forgo my return trip (pre-paid) across the ferry. The route was by now much quieter and pleasant but the wind had started to pick up and was headed right at me slowing me down considerably.

Getting to Wareham was uneventful and it was there I had to stop to work out how to get to Poole without using major 'A' roads with a lack of cycle tracks around.

This involved tarmac footpath at the side of the road for some considerable distance and then thankfully across the main road to Lytchett Matravers and then onto Upton, and Upton Country Park where I could pick up cycle paths finally, around the lovely Holes Bay. The rather grainy picture to the right is of the new Twin sails bridge lifting in Poole Harbour. 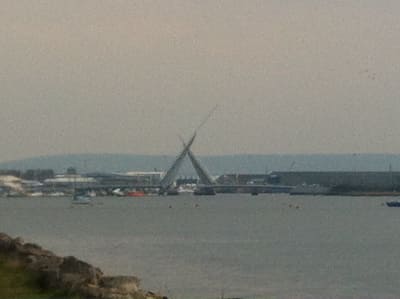 There is a lovely map of cycle paths in Poole itself but it seems they are in relatively short supply in the countryside compared with home. None the less a pleasant day with good weather, if a little cold, and some more good training under my belt.